What does a private pilot need to know about airplane navigation?

There are a number of airplane navigation methods, such as pilotage, dead reckoning and various airplane navigation systems that the pilot needs to know about and master. Knowing how to read an aeronautical chart and how to handle certain navigational aids such as VOR navigation are prerequisite for not getting lost in the air.

In order to describe the navigation basics let us first define a few terms and explain some fundamentals.

The Earth Geographic Poles For navigational purposes the shape of the earth is approximated by an ideal sphere. The axis on which the earth rotates is called the geographic Polar Axis. The two points where the axis meets the surface of the sphere are called: * the North Geographic Pole – or True North; and * the South Geographic Pole – or True South. If the earth was cut through the centre in the plane in which it rotates, then the hemisphere that accomodates the North Pole (which, in common terms, equates to the surface of the “top half” of the sphere) is referred to as the Northern Hemisphere. Consequently the “bottom half” would be the Southern Hemisphere. The circle that forms along this cutting plane and the surface of the sphere is called the equator. In real terms the diameter of the earth along its axis is smaller than along its rotational plane. The difference is only about 1/300 of the diameter. 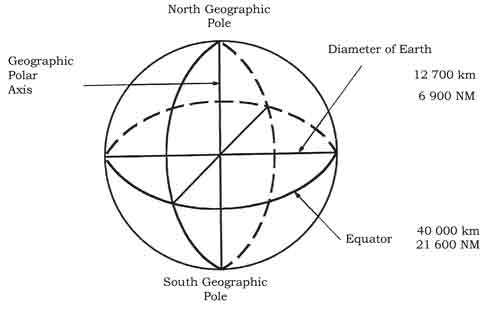 Figure: Terms and dimensions of the Earth. The earth rotates once around from West to East in 24 hours. Looking down onto the North Pole, this rotation is therefore anti-clockwise. The circle that forms at the earth’s surface in any plane that passes through the centre of the earth is called a Great Circle (GC). The following things are true for Great Circles: * A Great Circle is the largest circle that can be drawn on any sphere. * The shortest distance between any two points on the surface of a sphere is the arc of a Great Circle. * An infinite number of Great Circles can be drawn on a sphere through two points that are diametrically opposed. On earth the geographic poles are two such points that take special significance in this respect. The resulting Great Circles are called Meridians of Longitude. * In contrast to the statement above only one Great Circle can be drawn between two points on the surface of a sphere that are not diametrically opposed. The Great Circle that forms in the rotational plane, i.e. in the plane perpendicular to the axis on which the earth rotates and through its centre is called the Equator. A Small Circle is any circle on the surface of a sphere that is not a Great Circle, i.e. the centre of Small Circles is not at the centre of the earth. Parallels of Latitude (other than the Equator are Small Circles.) It is more convenient for a pilot, when using a Magnetic Compass or Direction Indicator, if it is possible for him to fly a constant Track direction. This can be achieved by following a Rhumb Line track, rather than a Great Circle track. A Rhumb Line crosses all meridians of longitude at this same angle and will appear on the surface of the Earth as a curved line concave to the nearer pole. Despite the fact that it might look the shortest on a chart in some projections, a Rhumb Line track is not the shortest track from one point to the other on a sphere. (see further down in the section on projections for an illustration) 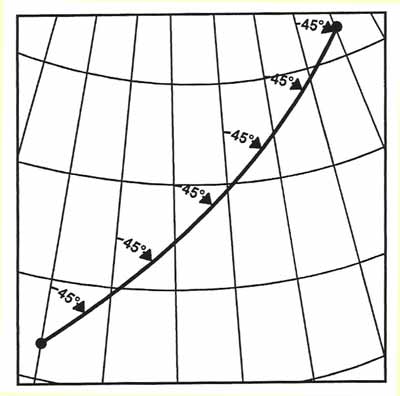 By continuing to browse the site you are agreeing to our use of cookies.
Don`t copy text! Just Fly!
Call Now
Directions